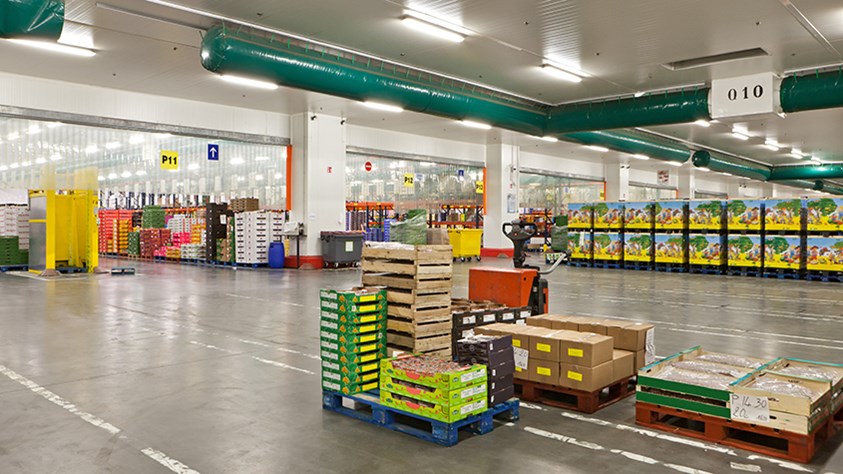 The IceDry® frost prevention method has been developed by Munters for use in freezing and storage facilities, resulting in faster freezing, frost-free storage, reduced accidents on slippery floors, lower energy consumption as well as greater production capacity. Awarded for its innovation in 2006, the technology has continued to impress customers all over the world ever since.

The European frozen food industry represents around 10% of the total European food manufacturing industry and the objective is to try to produce a greater volume using the same processing equipment, whilst also increasing turnaround rates of stock in storage.

Freezing equipment is designed for a specific level of production, and as the coating of frost builds up progressively on the evaporator it eventually becomes too thick, initiating a defrost. During defrosts it becomes difficult to maintain the temperature inside the process freezer, or the manufacturers must lower the rate of throughput to achieve correct freezing temperatures. The result is reduced output and more stoppages for defrosts. Shutdowns in processing lead to costly loss of production. Ice and frost are also unwelcome problems as employees slip and fall, a Health and Safety report puts the cost to employers of accidents at 100 million Euro.

Munters IceDry® systems work by creating dry low dewpoint air by passing the moist air through a slowly revolving desiccant wheel. The resulting dry air is then pumped into the inlets of freezer apertures, across cooling coils or into cold store loading bays or airlocks. Since it was launched, IceDry® has been successfully installed thousands of times, and has improved cold store conditions for countless food manufacturers all over the world.

In a process freezer IceDry® increases the production running time without defrosts and improves the efficiency of machinery, leading to improved output. When the Munters IceDry system is used, the time to dry out of a freezer after cleaning is also reduced by up to 25% and the freezer is started drier than would otherwise be possible.

Ice also prevents the free operation of cold store and air lock doors, preventing them from sealing properly, or even lifting them out of their runners. Smooth operation requires people to regularly chip away the ice by hand, a time-consuming job.

As slips are the main cause of major injuries at work, costs to business include civil damages, insurance costs, lost production and absences from work. Slips are highest in the food industry, so an effective preventative solution assists in controlling slip risks.

By removing the moisture that normally condenses on evaporating coils, the coils run more efficiently and much longer between defrosts.

IceDry® offers a simple but effective solution for reducing ice, and as the winner of the prestigious Silver European Food Tech Innovation award, this class-leading technology will be relevant for years to come.