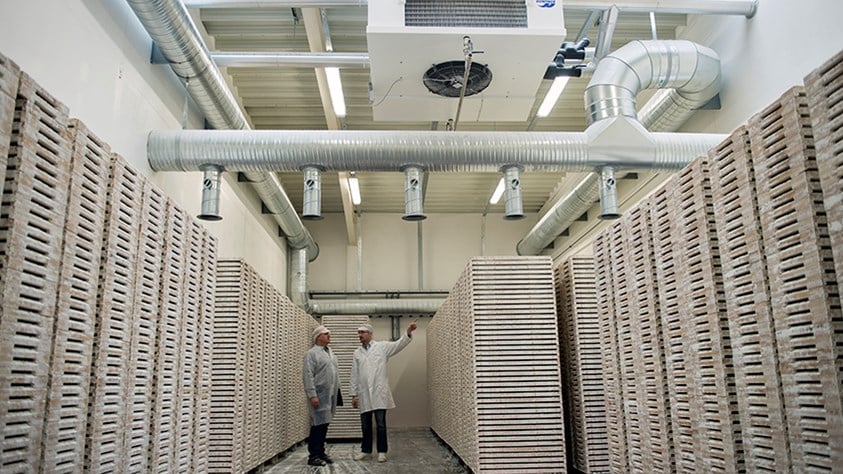 Carletti is a Danish chocolate and candy producer that started in 1918 as a small wholesale company. it produces and sells a wide variety of products through retailers for private consumers which are mainly located in Denmark and Northern Europe. In addition, they produce an assortment of coated candy products for industrial use in baked goods, as well as ice cream and dairy products. One of Carletti’s two production facilities is near Aarhus in Denmark, and the factory is certified to international standards to ensure the highest level of food safety. For many years, Carletti has been using Munters desiccant dehumidifiers to secure the strictly controlled and constant production climate which is required for its production processes.

As a modern company with a strong focus on competitiveness, energy savings are a strategic goal. Carletti has recently worked on four major energy-saving projects together with Ole Jakobsen, Senior Project Manager & Registered Energy Consultant from the Danish Energy Consultancy. Two of these projects were focused on the installation of equipment that carried out the dehumidification of process air in coating processes, and converting an oil burner into LPG-burner on their steam boiler.

Carletti used to have an older ventilation system to supply hot air to processes where there was a need for dry air to color, polish and dry products. Carletti has now invested in four desiccant dehumidifiers from Munters and has thus been able to reduce energy consumption by up to 50%. The process itself is slightly more expensive, but in return, the production capacity increased by shortening the drying process from 19 to 12 hours for a batch of 4,500 kg chocolate lenses.

In other words: Much less energy is being used per kilogram produced, and production per hour increased considerably.

Improved product quality as a bonus
“We’ve got a significant productivity boost, in addition to energy savings which amount to around five million kWh annually. The quality of our chocolate lenses improved because the colors are better when chocolate lenses are dried and polished with the dehumidified air instead of heated air. So the product has actually been given added value on top of a huge energy savings,” says Kent Egsgaard, Facility Manager at Carletti.

Munters dehumidifiers are an example of the positive effects that can be derived from switching to more energy efficient solutions. These two energy projects (converting the oil burner to LPG gas burner and the installation of dehumidifiers) are closely linked, as a part of the steam from the gas boilers is used to heat the air that removes the absorbed moisture from the desiccant wheel (rotor) in the dehumidifiers. The fact that gas is cheaper than oil has also resulted in reduced CO2 emissions and allows for stepless control of the energy supply - unlike the oil boiler which only had a high and low setting.

The search for energy savings continues for Carletti, and several projects that include Munters dehumidification solutions are planned for the future.