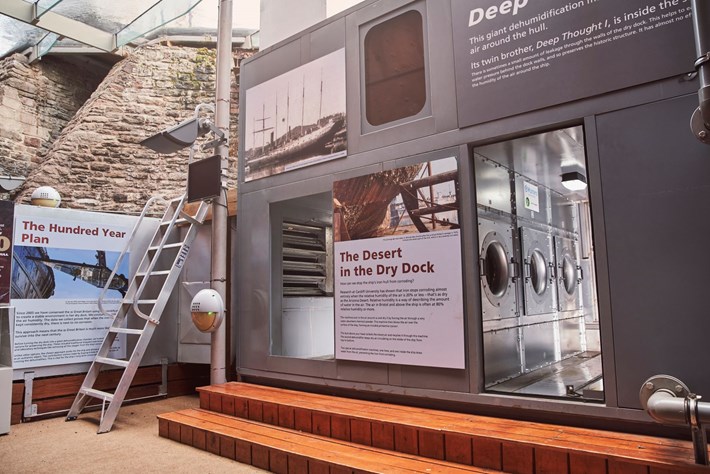 Launched in July 1843, Brunel’s SS Great Britain was the world’s first iron hulled, screw propeller-driven, steam-powered passenger liner. She was returned to Bristol in 1970 as a hull, and underwent a multimillion pound conservation program in the early 2000’s.

As part of this program, two specially-designed air handling units (AHU’s) complete with Munters desiccant rotor technology were installed to protect the iron hull from corrosion. One was installed inside the ship, and the other in the dry dock (often referred to as the dry dock dehumidifier).

“Looking after the ship and conserving the original iron is the most important thing that we do” said Nicola Grahamslaw, Ship’s Conservation Engineer for Brunel’s SS Great Britain. “By ensuring the air around the ship is kept at 20% relative humidity, which is as dry as the Arizona desert, we can stop the ship from rusting. This keeps her structurally safe for many years to come.”

Munters has worked closely with the SS Great Britain to carry out routine service and maintenance. Munters suggested replacing the old belt-driven fan (which was coming to the end of its expected life)
with the latest EC plug fan technology. This would reduce energy consumption, and improve resilience and efficiency.

Munters proposed a bespoke upgrade by designing a bulk head for the new fans that could be brought in in component form, flat packed, and retrofitted.

The upgrade was completed in just one day by removing the old belt driven fan, and replacing it with three electronically commutated (EC) direct drive plug fans from ebm-papst in a fan wall configuration and digitally integrated into the ship’s control system.

Chris Stead, Munters Projects Manager said “Ultimately we don’t want to expose the ship to humid air. In the morning, we started by removing the old fan and by the evening the new fans were up and running.”

Greg Frazer, Munters Service Sales, said “This upgrade brings cutting edge technology into the original dehumidifier with minimal disruption to the customer. There is little maintenance, and we predict energy savings for the fan are 25-30%.*”

The SS Great Britain Trust has committed to reach net zero carbon emissions by 2030, and conserving the ship is one of the biggest energy consumers.

“As with any conservation project, what you do has to be sustainable,” said Nicola. “Every time we make a tweak to the system, we are thinking about our carbon footprint, and learning how we can make that energy requirement as small as we possibly can on our journey to net-zero”.