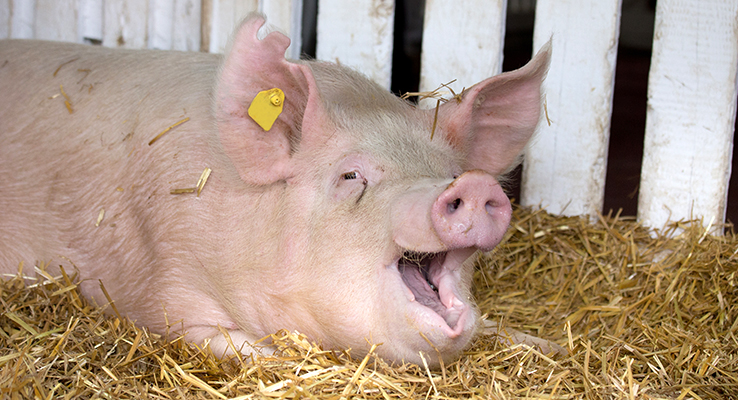 Hard facts about effect of climate control in swine

Yes, we have hard facts, which prove the importance of advanced climate to improve productivity in 4 legs industries!

When a small pig is born, one of the most important parameters is to secure the right climate conditions. If this is not done, there is a risk that it will die, lose weight or not get the first important raw milk from the sow.

A PhD study from Denmark shows that a too cold climate for new born pigs is the primary reason for mortality in the farrowing units. A dead small pig has negative impact on the farmer’s economy as he still has to give the sow the same amount of feed, use the same pen area, use the same electricity etc.

Optimal climate in the farrowing unit is essential since the piglets and the sow want different temperatures and if it is too hot for the sow, she will produce less milk.

Survival of one extra pig per sow has an economic value of around 33 Euro (244 dkr), depending of feed prices, meat prices, electricity cost, housing design and a lot of other parameters (prices in Denmark August 2016).

When the pigs get older they produce a lot of heat. This heat is removed by advanced ventilation systems. If the ventilation system for some reason breaks down the pigs will die after 20-40 minutes depending on age of pigs and housing design. Therefore it is essential to have reliable ventilation and alarm system. Maybe people outside the industry think “Why don´t they just keep the pigs outdoor”. Here the answer is that we cannot feed the world if all animals were outdoor. That would simply lead to too much uncontrolled pollution into the nature and not enough space. Also from a biosecurity point of view it is better to have the pigs indoor in controlled environment. Also in countries where the out-door temperature is high it is better for productivity to have the pigs indoor in buildings with advanced climate system.

When the temperature is above comfort level the pigs eat less. Daily gain varies between 600 and up to more than 1000 gram per day for growing pigs (30-110 kg) and it can easily cost 200 gram per day if the farmers do not have advanced ventilation and have to raise pigs  in for instance temperatures of 30 Celsius or even higher.

Also the feed conversion ratio can be reduced with up to 20% if the pigs are raised in high temperatures. These numbers are so crucial, so if the farm companies want to produce meat for the world also in the future this requires advanced ventilation.

Even in a country like Denmark, where it is relatively cold and all farmers have advanced ventilation, a collection of production results from 43 farms showed that the daily gain was 50 g less in July compared to January. So the pigs grow more quickly during winter even though the air quality is worse. That illustrates that even advanced ventilation systems can be improved.

The economic production benefits change from day to day due to variation of meat prices, feed prices etc, but a report from August 2016 in Denmark shows that if the daily gain in the finishing unit (30-110 kg) changes +/- 100 gram/day. The value for the farmer will be up to +/- 1.7 Euro/pig (12.6 dkr/pig).

If it takes longer time for the sows to get pregnant the farmer has to spend more feed per pregnancy and the sow will get fewer piglets per year. In Denmark the value is 11.7 Euro (88 dkr) for each percent point the farrowing percentage changes.