David Bennett chats about his new position, why strangers tell him secrets, and a few suggestions he has for improving the Pyramids. 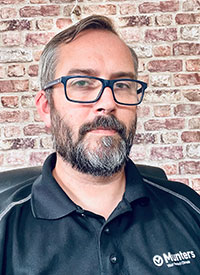 Have you faced any challenges in your new position?

There are a number of challenges, but not actually with the role – more with making the transition from being a salesperson to not being a salesperson. I've been a salesman most of my life, so I knew it would be difficult. I was building several complicated projects, including a proposal to renew all of the HVAC systems in the Heathrow control tower. At the moment, my old and new jobs overlap, so I’m doing both.

It’s challenging to take information out of my head and put it onto paper so it’s meaningful to someone else. I have to think about it from a multicultural, multi-business platform, because the way things work in the UK isn’t necessarily the same in France or Spain.  A lot of thought goes into selecting the most sensible products for each region.

To make it easier, I’m creating “crib sheets.” For instance, if someone wants to understand how to sell a plug fan project, I can give them a crib sheet with examples. What I don’t want is to give people rigidly formatted questions to ask. It’s better to engage with customers in your own way. It’s awkward to be directed to ask specific questions, and not be allowed to reword them. I’m trying to establish a process that lets people ask questions the way they want to, when they want to.

Will the skills and insights you acquired as the plug fan manager for Munters UK benefit your new position?

I’ve worked in this industry for nearly 20 years, including four years selling plug fans in the UK, and a decade before that selling another product that we still install in some of our kits. Some of the technology hasn’t changed much. So certainly, my experience with plug fans will be useful. But in this new role, plug fans are part of a larger project. When you open a 20-year-old unit, you often find additional parts that need repair.

COVID encouraged many customers to think about cleaning the air while making their systems more energy efficient, so part of my new role will be to support our team in asking those questions. If you already have a team installing a plug fan in a unit, they can also change the filter bank. Why not add that into your proposal?

You’ve built a lengthy career at Munters. What has convinced you to remain?

Apart from having the best culture I’ve ever experienced, Munters makes it possible for people from different areas to work seamlessly together. There’s a close-knit customer loyalty to the Munters brand. My six years have flown by, which means I'm engaged, and busy, and doing things I like.

You’re a talented manager and highly valued Munters employee. What else do you want the world to know about you?

How long have you got? Here’s something: people seem to tell me their secrets – even strangers. I put that down to being a salesperson, because the one of the things you do as a salesperson is listen, and that’s how you succeed. Not by selling things, but by listening to issues and problems and trying to provide solutions.

I also like to travel. Years ago, my wife and I visited the Pyramids. To reach the inner chamber, you must bend and walk down a steep slope. There’s a continuous flow of people, up and down. The ventilation is terrible! All those tourists huffing and puffing – the CO2 levels must be ridiculous. I couldn’t help but think: I should put in a quote to add some ventilation. But then again, they might not like it if we started banging into the walls.