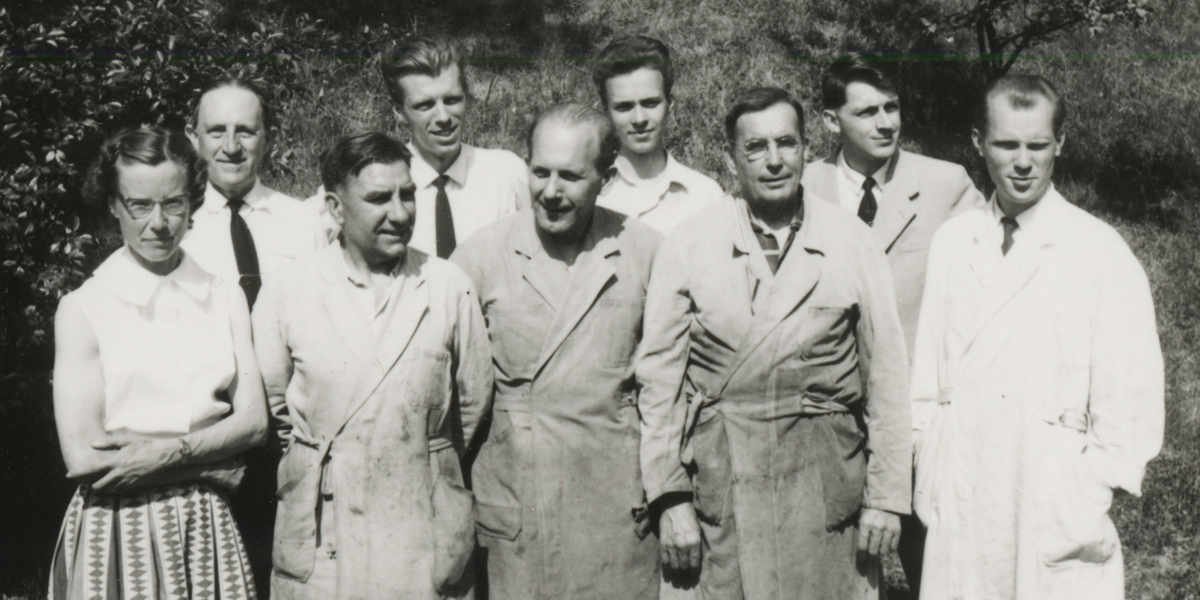 Munters is the original innovator in climate control since 1955. Founded by ingenious inventor and entrepreneur Carl Munters, the company was built around his insights to the laws of thermodynamics in combination with an ability to translate that understanding into groundbreaking technology. During his lifetime Carl Munters applied for nearly 1,000 patents, mostly within the areas of dehumidification and evaporative cooling. These two areas are core technologies within Munters. Today the legacy of innovation and engineering lives on within the company. The spirit of passionate innovator Carl Munters guides our daily work.

It was in 1955 that the famous Swedish inventor and entrepreneur Carl Munters (1897-1989) founded Munters together with Marcus Wallenberg and two other persons. His initial idea was to develop an air-conditioning system based on the use of evaporative cooling and dehumidification. The development of the key components of the system were the desiccant wheel and the evaporative pads. To the right a sketch of his first rotor, the core of dehumidification.

In 1923 Carl Munters and Baltzar von Platen invents the first cooling device with no moving parts, with the rights to the invention going to Electrolux. They use their global marketing organization for vacuum cleaners to also sell refrigerators. During his lifetime, Carl Munters was granted more than 1,000 patents.

Already 1947 the laboratory in Stocksund, where Carl Munters lived, goes into service and a small team of employees directed by Carl starts to work on development and inventions related to Munters business.

Refrigeration using heat results in the DesiCoolTM project: rotors for dehumidification and heat exchangers and structures for humidification/cooling. The first large-scale dehumidifier took a huge leap from the previsous size. The picture is showing the new device being tested in Carl Munters own garden before delivery.

1955 - Carl Munters & Co is formed. Swedish inventor and entrepreneur Carl Munters (1897-1989) founded Munters together with three others. The investor were:

At meetings, Munters had 2 votes, Wallenberg 2 votes, Wicander one vote and Berner 1 vote.

Carl Munters had in his previous projects with the manufacture of insulating materials such as cardboard and plastic foam, a partnership relationship with Wicander and Berner within WMB Insulation Company.
Carl Munters initial idea was to develop an air-conditioning system based on the use of evaporative cooling and dehumidification. The development of the key components of the system were the desiccant wheel and the evaporative pads. To the right a sketch of his first rotor, the core of dehumidification.

1958 - Breakthrough for dehumidifiers. The Swedish Armed forces want to decentralize their mobilization warehouses and order 200 dehumidifiers. Warehouse construction continues through the years and defense organizations worldwide begin using dehumidifiers on a large scale

Munters starts doing business in Fort Myers in the USA with products for evaporative cooling and closes license agreements for production of dehumidifiers in Amesbury, USA.

1968 - MCS is developed into a separate business.

The expansion was continued into new markets through subsidiaries and licensees. The company changed it's strategy at the end of the 1970s as some of the patents began to expire. The range of products and applications was gradually extended and the distribution was expanded to most parts of Europe, North America and Japan, largely through licensing arrangement with third parties. The international agent network is established. The focus is on energy saving applications.

1976 - A breakthrough order is shipped to Agfa for dehumidifiers for film production. The technology becomes critical to the manufacture of photographic film.

Broad international expansion. The modern Munters takes shape via acquisition of agents. Most of the licencees were acquired. The MCS business is expanded in several of the countries where Munters operates.

1988 - Munters acquires a unique Swedish air purification technology. The ZEOL products are further developed with Munters' rotor technology and helps improving the environment by reducing emissions of solvents from

1989 - A new plant opens in Tobo, Sweden, which enables cost-effective production of new rotors with unique characteristics for various applications.

In the 1990´s Munters expanded and became an international Group with own organization in over 25 countries and manufacturing in over 14 countries. The business was centered around The Humidity Expert theme. Focus on profitable growth. Environmental issues becomes more important, laying the foundation for HumiCool products. Munters focuses on products rather than core components.

1992 - A new plant is built in San Antonio to concentrate dehumidification applications, e.g., for supermarkets and ice rinks.

1997 - Munters is listed on the Stockholm Exchange.

2000 - Munters establishes sales operations in Thailand and Korea and opens a CELdek® plant in Thailand.

2001 - Munters acquires Aerotech, a leading US supplier for the Aghort industry.

2005 - Formation of Global Divisions New organizational structure. Up until 2005, Munters was organized into three regions – Americas, Europe and Asia. Those regions were in turn divided into three product areas. Since mid-2005, the Group has been managed via three global product divisions – Dehumidification, MCS and HumiCool. That change was successful and has resulted in higher gross margins and enabled a more coordinated sales process to be achieved, aimed at international customers. In addition, the new organizational structure has contributed to a more concentrated product portfolio and stronger service offerings.

2006 - Acquisition of spot heater manufacturer SIAL broadens the offering to the HVAC and AgHort customer segments within the HumiCool division. It is follows the strategy of becoming a full climate system provider to agri­cultural customers.

2007 - Munters is more and more becoming an expert in Indoor Air Treatment, rather than the Humidity Expert. The acquisition of US-based Des Champs Technologies complements the Dehumidification product range and strengthens Munters position as a leading supplier of energy-efficient climate control solutions for commercial buildings.

2010 - Munters focuses on the core business and decides to divest division MCS. Triton, a leading private equity firm, bought the division. The transaction was completed October 1, 2010.

Nordic Capital Fund VII purchased Munters at the end of the year. Dec 23, 2010, Munters was de-listed from the Stock Exchange.

2011 - Munters acquires the majority share in the Israeli company Rotem. They are specialized in control and management systems for agricultural and horticultural applications.

Munters and the Chinese company Keruilai signs an agreement of a joint venture.